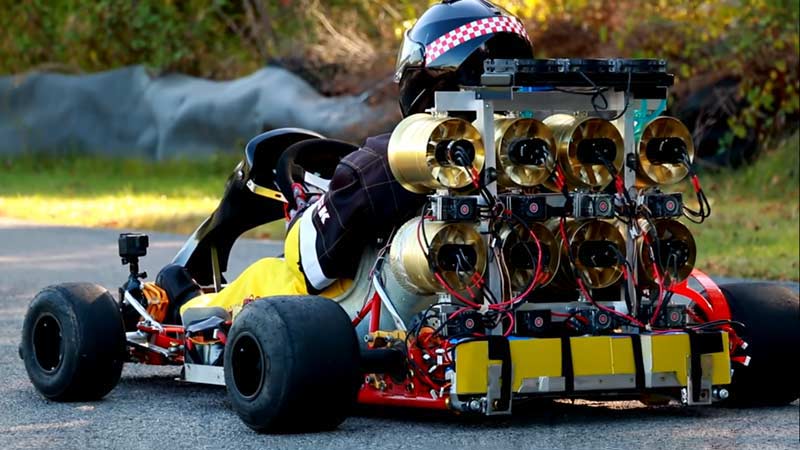 Go-karts are racing machines that are known for their light weight, fast speeds and quick acceleration. However, not all go-karts are the same. They’re generally fast, but exactly how fast is fast?

If you’ve been wondering what the fastest go-kart in the entire world is, it’s the Daymak C5 Blast. This go-kart reaches 0 – 60 mph in just 1.5 seconds and has a faster acceleration than a Formula 1 car. If you don’t quite understand how fast that is, it’s really, really fast.

In fact, the Daymak C5 Blast is faster than a lot of professional racing vehicles including an F1 car, a MotoGP bike, and a supercar. It is powered by 12 high-performance electric motors. These motors are powered by a large 2.4 kWh Lithium Panasonic battery and 12 x 5000mAH batteries.

Let’s take a look at this super fast go-kart in a little more detail! But first, let’s see who is behind this remarkable invention.

About the Company Behind It

With such a fast acceleration, the Daymak C5 Blast is changing what the words ‘fastest go-kart’ mean, especially when the current record for the fastest kart is held by a kart that reaches 0 – 60 mph in about 2.6 seconds – more than one second longer than the C5 Blast.

The C5 Blast is built by the Toronto-based company, Daymak. They are involved in designing, developing, and distributing Light Electric Vehicles (LEVs) to more than 150 retailers.

They create more than 50 models of electric vehicles and are innovating at a consistent rate. The company has been around since 2002 and has since won various awards, including The Clean Tech North American Award.

Daymak has the goal to become the leader in this category of vehicles and eliminate CO2 emissions completely. The C5 Blast is a testament to what can be achieved in terms of speed and electric vehicles, particularly go-karts.

So, what is the Daymak C5 Blast? In short, it is the fastest electric go-kart in the world right now. Even though the kart is still in its alpha stage, it is still going faster than the current record holder.

The Daymak C5 Blast can reach 0 – 60 mph in just 1.5 seconds, which is more than one second less than the current fastest kart as crowned by the Guinness Book of World Records. In fact, it’s also faster than any production supercar or superbike that’s even been made.

And the company isn’t stopping there. They are planning to make their go-kart even faster with its newer versions. The company has this crazy, yet really cool plan to make the kart lighter and faster, in order to make it “float like the Star Wars land speeder”.

However, the C5 Blast is what they have come up for now! Let’s take a closer look at the specifications, performance, price and design.

The Ultimate version of the kart is what can achieve these insane speeds. It’s equipped with a liquid-cooled motor of 10,000 watts along with 12 Electric Ducted Fan (EDF) motors.

8 of these EDF motors are 120mm in diameter and combined, provide an upwards thrust of 96 kg. The remaining 4 EDF motors at the rear have a diameter of 140mm and combine to create 60 kg of forward thrust.

This version of the kart has a weight of around 200 kg but it goes down to around 100 kg when the EDF motors are turned on. This weight reduction is what helps to achieve the record-breaking acceleration and speeds.

For those who do not want all of this speed, or don’t have the budget, there’s also a Regular version of this go-kart with only one motor. This model cannot go as fast as the EDF model, of course, but it does go really fast for its specifications!

Speed is where this kart really shines. So, how fast is fast? The EDF version of the Daymak C5 Blast Go-Kart can accelerate from 0 – 60mph in 1.5 seconds, and chances are that they will be able to reduce the time even more.

The Regular version of the kart is also very fast, reaching the same 0 – 60 mph in 3.9 seconds. This is still faster than many professional go-karts out there, so the Regular version is definitely quick off the mark, too.

Here’s a quick acceleration comparison of the Daymak C5 Blast Go-Kart to other types of vehicles:

The C5 Blast is so fast off the mark that it leaves all types of supercars and superbikes in the dust. This is of course only on a straight section and due to its lightweight construction and technology. Unfortunately, it would most likely not be able to beat all of these vehicles on a race track.

Being the fastest go-kart in existence right now makes the Daymak C5 Blast quite an expensive vehicle. The EDF version of the karts will cost you $59,995 or around £34,000. If you want the Regular version, it’ll set you back $9,999.

It wouldn’t make much sense if the fastest go-kart in the world didn’t look good, right? Luckily, the Daymak C5 Blast doesn’t disappoint and shows off its power in a very cool way. The majority of the kart is finished in a combination of matte and glossy black colors, giving it a very elegant and aggressive appearance.

This is combined with a silver seat which strikes the perfect contrast with the dark chassis. The coolest thing about the kart’s design, however, is how the EDF motors are showcased. There are two of these on either side of the driver’s back, making it very clear that they are the star of the show.

Glowing in their bright gold color, these stand out from the rest of the body in a very obvious way. These elements, as well as its well-executed contours give the C5 a perfect blend of minimalism, flair and aggression.

How Is the Daymak C5 Blast Built?

Each C5 Blast Go-Kart is custom-built and hand assembled. After completion, the kart is thoroughly tested in Toronto before it’s delivered to its customer. Because of the customs construction and rigorous tests, the entire process can take up to 60 days to complete.

How to Purchase the Fastest Go-Kart in the World

Since this is not your everyday street kart, you cannot buy it through retailers or online marketplaces. Instead, it must be purchased directly from Daymak’s website where you first have to fill out a form.

After they have received your request, you’ll need to speak to a sales representative. They will then guide you through the ordering process, inform you about the payment details and establish the estimated timeline. They’re also able to send you more information upon inquiry.

Here are two videos from Daymak’s official YouTube channel on the fastest go-kart ever made. The first video is a teaser from 2017 and the other a recording of a track test session a year later in 2018.