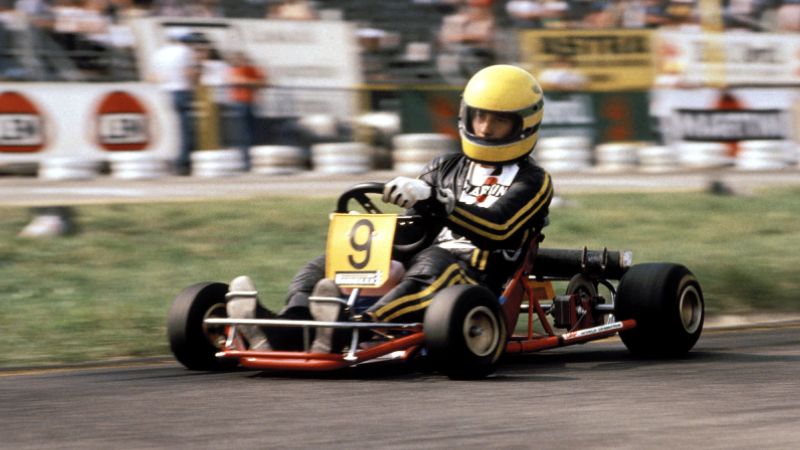 Karting is a motorsport that is enjoyed by people of all ages, but it is especially great for children who are interested in racing. Children can start competing in karting competitions at a very young age because the sport has a low barrier to entry and has less regulations than traditional car racing.

When you take a look at some of the biggest names in Formula 1 racing, you’ll see that a lot of them started their motorsport career racing go-karts. Many of them still love to kart from time to time and attribute their F1 success to karting. You’ll be able to find many of these references in their go-kart quotes.

This goes to show how instrumental karting can be for motorsport in general, especially at a young age. The following list shows the most famous go-kart racers who eventually moved on to other motorsports like Formula 1. This is a great showcase of what an amazing platform karting can be for racers of all ages.

Ayrton Senna was only four years of age when his father built a go-kart for him. He started karting from that young age and then went on to make a career out of it. He moved on from karting to F1 in 1984 when he took part in his first ever race: the Brazilian Grand Prix. In F1, he raced for Toleman Motorsport, Lotus, McLaren, and Williams.

Senna was a big supporter of karting and even said that it’s the “purest driving experience” and that he liked it more than F1 racing. This coming from the Brazilian racing legend who won the F1 world championship three times is big praise to our motorsport!

Anyone who is into F1 racing knows his name. Schumacher got his racing career started much like Senna. He started karting when he was only four years old in a go-kart that was built by his father.

At an early age, the joined a kart club in Kerpen. He wont on to win first place in the German Junior Kart Championship of 1984 and 1985. With big ambitions, he then joined the Belgian F1 Grand Prix six years later in 1991.

Schumacher raced for Jordan, Benetton, Ferrari and finally Mercedes. He won an astonishing seven championships and also held records for the most wins, podium finishes, and pole positions when he retired in 2012. A true F1 legend that owes much of his success to karting!

British-born Lewis Hamilton was eight years old when he started karting at the Rye House Kart Circuit in 1993. He began winning very quickly and developed his confidence. Only two years later, he went up to Ron Dennis, who was McLaren F1’s team boss, and told him that he’d be racing his cars soon.

In 1998, he was signed by Dennis into the driver development program by McLaren. Hamilton drove his first Grand Prix in 2007 as the first and only black racer. He almost won his debut championship, losing only by one point.

The next season, Hamilton clutched his first win in the last lap of the last race and became the youngest world champion. Driving for McLaren and then Mercedes, Hamilton has a total of seven championship titles so far. Another world-class driver who started out his racing career with go-karting.

Alain Prost first experienced karting at the age of 14 on a holiday with his family. He started karting then and went on to take part in tournaments. He won the European and French Formula Three championships before going on to join F1 as a McLaren driver in 1980 when he was 24 years old.

Prost went on to win four F1 championships in his career and drove for McLaren, Renault, TAG, Honda, and Ferrari. He had a strong rivalry with Ayrton Senna. Despite that, he was known for his smooth and relaxed driving style and was known as The Professor on the racetrack thanks to his strategic approach to racing.

Fernando Alonso is a Spanish racer who started karting at the age of just three. He took part in various karting competitions and found national and international success. In 1999, when he was 17, he went on to take part in car racing at the Euro Open.

After his karting success he signed with the Minardi F1 team. Just a year later, he joined Renault as a test driver and became their racer in 2003. He quickly won two championships with Renault in 2005 and 2006. At the time, he was the youngest world champion. Other than Renault, he also raced for McLaren and Ferrari.

Finnish racer Mika Häkkinen began his karting career when he was just five years old. He won regional as well as national championships at a young age before deciding to move on to car racing. He progressed into the Formula Ford and Formula Three tournaments in the UK and in Italy.

After gaining success in these series, he joined the world of F1 in 1991. He started his career with Lotus and then made the move to McLaren. He won two championships in his career.

Robert Kubica is the only Polish driver to have competed in Formula One. He started his racing journey at four years of age when he started karting around plastic bottles. He joined the Polish Karting Championship and won six titles within just three years. He then went on to win the Italian Junior Karting Championship in 1998.

He joined Formula One as a test driver for BMW Sauber. He began racing in F1 in 2006 and got his only win at the Canadian Grand Prix in 2008. Kubica also drove for Renault and Williams.

Vettel was exposed to karting at the very young age of 3 and started racing them competitively in 1995 when he was just 8. He joined the Red Bull Junior Team when he was just 11 and went on to win various titles. He then moved to automobile racing in 2003 and was the victor of the German Formula BMW Championship in 2004.

He joined BMW Sauber as their third driver in 2006 for the Turkish Grand Prix. He then became the driver for Toro Rosso in 2008 and then got promoted in 2009 to Red Bull. He won four back-to-back titles, marking him as one of the greats in the sport. He then joined Ferrari in 2015 and subsequently Aston Martin. So far, he has won 4 championship titles.

Kimi Raikkonen started karting when he was 11 in Espoo, his hometown in Finland. After karting for ten years, he switched over to car racing and won the UK Formula Renault series. Just a year later, he entered the world of Formula 1 as a driver for Sauber.

Subsequently, he joined the McLaren team in 2002 and was the runner-up for the 2003 F1 title. He won his only championship in 2007, with Scuderia Ferrari. He also drove for Lotus for two years and also Alfa Romeo.

David Coulthard started his racing journey with karting, at the age of 11. He achieved success in the sport and decided to move on to car racing. There, he raced in the British Formula Ford Championship, as well as the Formula 3000 series with great success.

He joined Williams for the 1994 season of Formula One. He then made the move to McLaren in 1996 and then to Red Bull in 2005. Even though he didn’t win any championships, he secured 13 wins during his F1 career and also starting his career as a kart racer.

Hailing from France, Jules Bianchi started karting when he was just 3, at his father’s kart track. He had great success as a kart racer, but eventually said farewell to karting in 2007 and competed in the Formula 3 Euro series. He also raced in Formula Renault 3.5 and GP2 before coming to Formula One.

His entry into this new world was as a practice driver for Force India. It was in 2013 where he made his first appearance as a racer for Marussia F1. Sadly, Bianchi didn’t have the chance to claim any wins because he lost his life as a result of an accident during the 2014 Japanese Grand Prix.

Karting since he was 4, Max Verstappen quickly made a name for himself after winning the 2007 Dutch Minimax and many other karting competitions afterward. He moved to car racing in 2013, raced for Van Amersfoort Racing in the European Formula 3, and shifted over to F1 in 2015.

He was the youngest to participate  in a Grand Prix at the time, racing with Torro Rosso. He was then promoted to Red Bull Racing and won the Spanish Grand Prix in 2016 on his debut. He also raced for Honda and got another win, which was a first for any Honda driver. He has a total of 15 wins to his name.

Mark Webber was intrigued by karting because of his schoolmate’s go-kart. Seeing this interest, his dad bought him one and he began racing. He took part in many karting championships with great success and eventually moved to car racing. Reflecting on his racing career, Mark Webber credits karting for all his success.

He raced in the Australian Formula Ford and British Formula 3 championships, as well as the FIA GT Championship and others. He started his F1 career with Minardi in 2002 before moving to Jaguar the next year. He raced for Williams and then Red Bull to finish off his F1 career. He claimed a total of 9 wins in F1.

Vitantonio Luizzi began winning karting competitions at a very young age. He won the Italian Karting Championship in 1993 and the Karting World Championship in 2001. He then moved to the German Formula Renault Championship and many others before coming to F1.

He was signed by Red Bull in 2005 and also raced for Toro Rosso, Force India, and HRT in the subsequent years. Unfortunately, was unable to secure any wins during his time in F1 and moved to other motorsports.

Nico Rosberg has been involved in racing since he was 6 years old. He got his start as a competitive kart racer and won different regional and national championships in France. He also competed in world championships. He was 16 years old when he decided to shift to car racing.

He won the Formula BMW ADAC Championship in 2002 with VIVA Racing. He then progressed to Formula 3 Euro and GP2 Series. His entry into F1 was through Williams, in 2006. He then raced for Mercedes alongside Schumacher and won his only championship title in 2016.