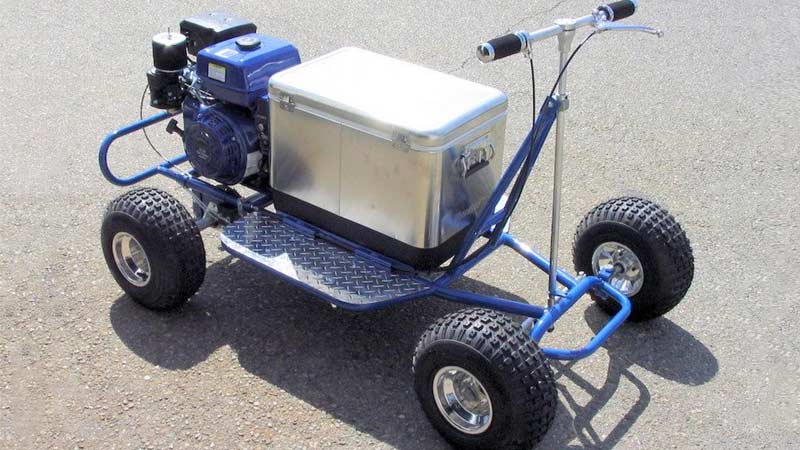 Go-karting is mainly about fun and action. However, there is also a funny side to the motorsport! The following are some of the funniest and weirdest go-karts in existence. From furniture-inspired designs to wacky everyday objects, there are a lot of creative kart designs out there.

Some of these entries show how creativity is all you need to build something that no one else has really thought of before. The best part about this is that you can actually buy some of them and drive them around in style, while putting a smile on people’s faces!

This awesome cooler go-kart is made by Crazy Coolers and is an all-terrain go-kart that can be driven on multiple surfaces like concrete, sand and even snow! These go-karts are equipped with a 4-stroke 49cc engine and high-quality disc brakes. Additionally, they have a dual rear wheel drive design with intuitive thumb controls and great ground clearance.

These karts are also very durable and easily portable. What makes these karts funny is that, well, they’re essentially just coolers that you sit on top of and drive around on. Just imagine driving around with a 48L cooler go-kart to your next barbeque. Imagine those smiling faces!

The level of ingenuity and wackiness it takes to come up with an idea like this and then actually make it work is amazing. There are plenty of cooler karts available on the market. The Crazy Cooler karts have a starting price of $1,349.

While this particular kart cannot be purchased, it is one of the weirdest, yet funniest on this list. All the way back in 1990, some engineers at Mazda decided to build a vehicle that could fit into a suitcase for a competition.

The Mazda Suitcase Go-Kart features a 1.7 hp engine, handlebars and tires, with all components fitting into a Samsonite suitcase. Not only was one able to drive it, but it could be assembled in under one minute.  Once assembled, the Mazda Suitcase Kart can be driven like a normal go-kart. It can go as fast as 30 km/h and it is still in existence today.

Just one version of the kart can be found today and the original prototype was destroyed. However, there are many replicas available in the market and there are even plans out there so that enthusiasts can build it themselves.

Do you remember the SEGA game OutRun? Have you ever wondered what it would feel like to drive a go-kart while playing the game at the same time? If not, then you’re most probably with the majority of people! The SEGA OutRun Go-Kart is one of the funniest go-karts in existence. It’s essentially an arcade game cabinet built on top of a functioning go-kart.

The funny part of it is that when you drive the kart, you’re actually looking at a screen in front of you while playing the OutRun game! Essentially, you’re playing an arcade game while actually driving a real kart. Yes, it’s certainly weird and should also only be done under supervision.

This kart is designed and self-built by Garnet Hertz and his colleagues. It uses cameras that scan the road in front, which is then shown as an 8-bit road on the game screen. This go-kart can go as fast as 13 mph and is an awesome option for any retro arcade fan.

How about one of the weirdest go-karts ever made? The toilet go-kart has two toilet seats attached to it instead of a bucket seat. A guy named Dave has used a stripped-down kart frame, some ingenuity, and a sprinkle of weirdness to create his Toilet Go-Kart.

He strapped two toilet seats to the kart’s frame, added a couple of coolers where the toilets’ water tanks used to be, and started driving it around! This is a fully-functioning go-kart, and a really fast one at that! It can reach speeds of up to 32 mph which is quite a speedy toilet! Dave has also attached toilet paper rolls on the sides for extra style points.

They come in handy too, considering that the coolers at the back can hold beers in them. Unfortunately, if you want a toilet kart of your own, you’d probably need to build one for yourself. But hey, at least there is some good inspiration out there!

Have you ever sat in the shopping cart as a kid and zoomed around the grocery store? If you have and you miss that feeling, then taking a look at Charles Guan’s crazy LOLriokart is sure to make you feel nostalgic. This is a go-kart made out of a shopping cart!

Boasting a two-stroke engine, some discarded wheels attached to a frame, and a shopping cart with the base cut off to make a protective cage around the driver, the LOLriokart is a work of art. It cost Guan only $300 to build, so you might feel inclined to build your own.

It can go up to 30 mph and has disc brakes that are used in mountain bikes. It also uses previously dead and discarded batteries that Guan refurbished and can power the shopping cart go-kart for about 12 miles!

This is yet another example of how a little imagination can lead to something absolutely spectacular. Well, spectacularly funny! This go-kart has been heavily inspired by the design of a tank, and one look at it is enough to see that.

The maker of this go-kart created the tank kart himself, using nuts and bolts from Home Depot, an old IKEA cabinet for the frame and seat, as well as some IntraLox sprockets to make the wheels. The end result of all his hard work is a kart that has a continuous track, just like an actual tank does.

These tracks are moved by 12 aluminum wheels and the entire go-kart is powered by two 1000W, 48V motors taken from an electric scooter. Due to its setup and weight, it can’t reach high speeds, but that doesn’t make it any less awesome. Because at the end of the day, it’s a go-kart that looks and moves like a tank!

This Couch Go-Kart is the perfect vehicle for every couch potato out there who just wants to relax on a comfortable leather couch even when they’re going out for a grocery run. Too bad that it can’t be bought though!

Designed by Evolution Motorsport, this has to be one of the weirdest and funniest karts ever built. It also happens to be the fastest couch in existence as per Guinness World Records. With a top speed of 101 mph, this is more like a racecar than a small kart that’s designed for fun.

It is powered by a Suzuki GSX 1400 motorcycle engine which is what gives it this high speed. And if you want to have a nice cup of coffee while you’re driving around on this couch, there’s a coffee table attached to the front too!

If you prefer to sit on a barstool rather than a couch for some reason, or maybe you actually want to buy a kart made out of furniture, then the Barstool Racer Go-Kart is for you. This is a fully functional go-kart made out of a steel tube frame with a complete barstool attached to it.

The Barstool Racer comes with a 6.5 hp engine, a mechanical disc brake, aluminum racing wheels, and a lever for braking. It also features racing slicks and a T-bar steering system that makes it look truly unique. You can buy the Barstool Racer for a price of $1,499 in its Bare Metal finish.

If you wish to get it with a bright powder coat finish, you’ll need to pay $199 more. If you’re looking to buy a weird, funny and practical go-kart that you can actually drive around, this one fits the bill quite nicely.

Hi, I'm Gerrit. I have been racing go-karts competitively and recreationally for the past 20 years. Apart from actively growing local karting communities, I run GoKartGuide and write comprehensive articles, guides & reviews about go-kart racing. I race, build, mod, & discuss go-karts whenever I find the time! Thanks for stopping by and happy karting!