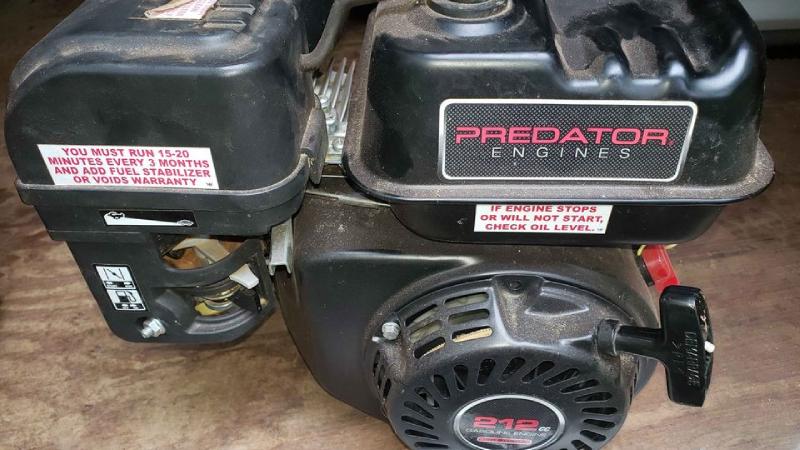 The governor on the Predator 212cc engine limits the speed of your go-kart by regulating the fuel intake once the engine hits 3,600 rpm. It’s not an electronic governor, rather a mechanical component.

Take note that in order for your predator engine to support the added speed and engine stress, you’ll need a a billet flywheel, billet rod and a gasket set. You can find these below for Hemi and Non-Hemi predator engines:

You’re also able to do this manually with a set of tools. Here are the steps you’ll need to take, in order to remove the speed governor on a Predator 212cc engine:

Before we start, make sure that you have these tools available to you, as you’ll need to access the engine:

You can also use an appropriately sized or adjustable torque wrench for this, although I find using an M6 socket with an impact wrench much easier. The Predator 212cc uses 10mm bolts (M6 metric sizing) as the engine is modeled after Honda specifications. M6 bolts are equivalent to US 6-point 1/4-inch wrench sockets.

1. Remove the Engine From Your Go-Kart

The first thing you’ll need to do is remove the Predator 212cc engine from your go-kart. This means removing the engine from the mount, so that you can place it on a workbench or table.

The reason why you won’t be able to remove the speed governor while the engine is mounted, is because you’ll need to drain the oil and also access the internal components.

When removing your Predator 212 engine, remember to remove all of the mounting bolts, disconnect the fuel lines, as well as the drive chain. After you’ve completed this step, proceed to moving the engine onto a stable surface, preferably a workbench or a sturdy table.

Take note that in some cases, you may need to remove the fuel tank on top of the engine, in order to access the exterior governor mechanism.

2. Drain the Oil Out

Now, before you start getting into the internal components of your Predator 212cc, you’ll need to remove the remaining oil first. If you don’t do this it’ll drip out while you’re working on it.

In order to drain the oil out, simply place your engine upright over the edge of your workbench. Place a bowl or tray underneath and remove the oil drain plug. It’s the short 10mm (M6) bolt and washer that are located at the bottom of the Predator engine, circled in red below.

Use a fitting socket or wrench to remove it until the oil is fully drained from the engine. You may lift the other end of the engine to ensure that all the oil is out. Once there is no oil outflow, simply screw the oil plug bolt and washer back in.

If you have a clutch, simply remove the crankshaft bolt, as well as the washer, and slide the clutch off the key and crankshaft.

Since you have already removed the chain from the crankshaft or jack shaft in the first step, you can simply slide off your transmission and proceed to the next step.

4. Take Off the Predator Engine Side Plate

You can now start to make your way into the interior of your Predator 212cc engine. Keep the engine position the same, so that the engine side cover and crankshaft are pointing towards you.

You will notice 6 bolts (M6) that hold the engine cover against the engine. These are also 10mm in diameter, and you can use an M6 socket or wrench to remove them.

Once all bolts are removed, you can either flip the engine over so that the crankshaft is pointing upwards, or leave the engine as it is. You’ll need to remove the engine cover either by edging a thin and sharp object in between the Predator engine and the side plate or by using a long tool as a leverage against the oil intake.

This is where the front dipstick is located. Make sure that you don’t damage the gasket, which is located in between the cover and the engine. Most of the time, the gasket should still remain attached to the side cover.

There is no need to detach the gasket, as you would otherwise need to assemble it again later. Once the cover is off, simply lay it to the side.

In this step, I’ll teach you how to remove the governor. But before that you’ll need to know where it’s located. When looking inside the engine, the governor is located on the top left. Take a look at the image below for better reference.

Here you’ll see the governor gear that is covered by a governor arm, which would typically regulate the speed. You’ll also notice that the governor arm is attached to another 10mm nut (on the top side of the engine exterior).

Take the same socket or wrench and proceed to remove this nut. This allows you to move the governor arm in and out. Simply break or cut the arm off, so that you have access to the governor.

Now you’ll need to remove the governor itself. This can be quite tricky, as there are several parts that need to be removed. Take note of these parts below.

Parts that need to removed:

Start by removing the lock pin and the shaft of the governor. After these are removed, you can proceed to take out the clip and the gear itself. Lastly, remove the washer that is located underneath the governor gear.

It may be hard to access these parts due to space constraints. I would highly recommend a pair of pliers to do this. For smaller parts like the pin and washer, use a sharp object that lets you push it up from underneath.

After having removed all 5 components, ensure that none of these parts remain inside the engine. Leaving remnants inside your Predator engine can cause potential damage to it, so make sure that everything is cleared out thoroughly.

6. Rebuild and Remount the Predator Engine

Now that the governor has been completely removed and you’ve ensured that no remnants are left inside the engine, it’s time to reinstall the gasket and the side cover back onto the Predator 212cc engine.

Do this by placing the side cover back on the engine until the sides are completely sealed. When screwing the bolts back on, make sure that you do that in an opposite sequence so that equal force is placed on the gasket.

For example, lightly tighten the top right bolt, then bottom left, followed by top left, bottom right and lastly the two side bolts. Then proceed to tighten them all. It’s best to use a torque wrench for this.

Now, you can proceed to reinstall your transmission, the chain and mount the Predator 212cc engine back onto your kart. Don’t forget to take it for a spin to test it. Your go-kart should not be limited by 3,600 rpm anymore.