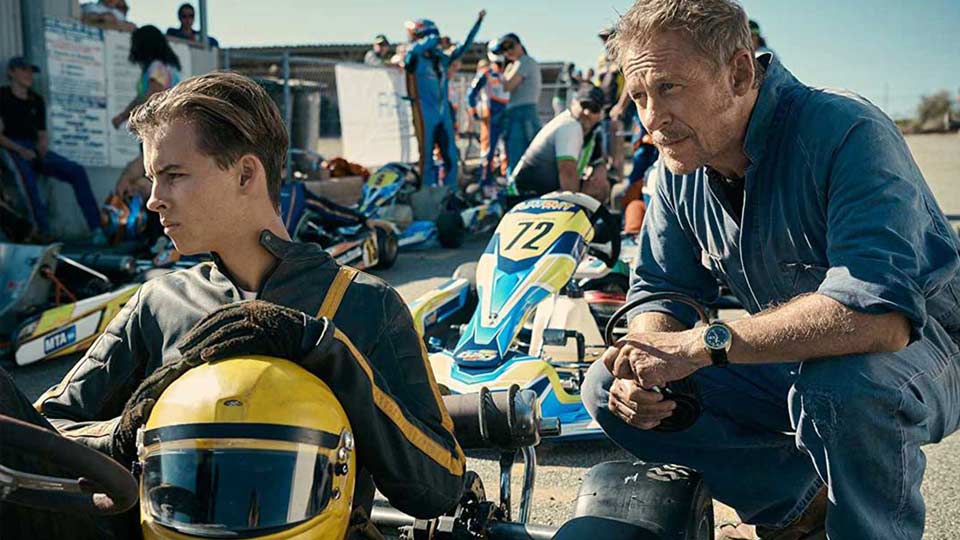 Go-karting is probably one of the most accessible motorsports to get into. You can just simply go to a go-kart track and have a quick session whenever you feel like it. That is one of the reasons why it has become so popular as a motorsport and perhaps also why there has been a big influx of movies, films and documentaries about karting in recent decades.

The market for such movies and series is growing quickly because people watching movies about go-karting can actually go out and have a similar racing experience. They can’t really do this with many other motorsports, mainly due to the lack of accessibility and requirements. Just last year, Netflix released Go Karts (Go!) which became very popular among karting fans – and even among people who were new to the motorsport. This show has garnered good reviews overall.

This movie showed that there is a large number of people interested in watching movies about motorsports, particularly go-kart racing. So I thought, why not create a list of the best movies about go-kart racing? Having watch them all myself, I’ve created a collection of go-kart movies with a short synopsis. The following list of go-kart movies is ordered chronologically and if you’re into karting or planning to get into it, I would definitely recommend them.

Go Karts, also simply known as Go! is one of the most exciting go-kart racing movies and was released in 2019. This movie by Owen Trevor is a classic tale of a young boy who must learn to control his recklessness, in order to defeat a professional kart racer in the national championship.

Based in Australia, the movie features Jack as the main protagonist who has a talent for karting but needs a lot of help from his mentor Patrick, the engineer Mandy, and his friend Collin in order to make the most of his talent and become a racer.

Go Karts (Go!) is not only a movie about racing go-karts but also about overcoming challenges and relationships. The movie is directed beautifully as well, with realistic racing sequences that make you feel much more involved in the whole story. The movie is often compared to the Karate Kid, so if you’ve seen that movie you should be able to figure out what this one is like. Long story short; it’s pretty good!

If you’re into movies about racing – who’s not, really? – then you’ll find this one a great foray into the world of competitive karting. Add to that the coming-of-age style of the storyline and you have a movie that is sure to keep your eyes glued to the screen. It’s definitely one of the best movies about go-kart racing featuring an epic and adventurous storyline. If you’re interested in watching Go Karts (Go!) you can catch it on Netflix.

What better way to create a documentary about karting than by asking actual karting enthusiasts to kickstart and contribute, in order to bring the project to life? That’s exactly what John Shofner did when he created a Kickstarter campaign to generate the funds he needed to create an all-inclusive documentary about this sport.

Being such a big fan and supporter of competitive karting is what helped him reach out to the people, get this funding, and finally create a go-kart documentary. This documentary is a story of how karting brings people together. Specifically, how it creates bonds between families and inspires children to do well in school so that one day they can follow their dreams.

It talks about the different kinds of karts there are for the various karting classes, and what the drivers like about each of them. Ultimately, it hopes to showcase karting as a real, serious sport that is often misunderstood by the general public. If you’re a big fan of karting, then you will love this documentary right away.

If, on the other hand, you’re someone who doesn’t know much about the sport but is willing to learn more about it, then you will also love it. It’s a great look into the actual world of competitive karting that is bound to teach you a lot about this exciting and thrilling motorsport. Become One is available online. Unfortunately, the official Facebook page has been removed.

Severe Racing is another documentary about the thrilling world of competitive go-karting. It focuses on some of the most popular and important racing events in karting, including The Supernationals, Pro-Kart Challenge, Stars of Karting, and many alike. The documentary also includes interviews with various professionals who will provide unmatched insight into this motorsport.

Whether you’re interested in oval kart racing, night races, or races that take place in the snow, this excellent documentary will satisfy your viewing needs. The dynamic races intertwined with some very informative interviews makes for a very eye-opening experience for all those who are interested in karting and those who are new to it. It’s most certainly one of the better go-kart movies out there – in a documentary style.

The intense action of a fast-paced kart races can be felt throughout this visual feast. Add to that a cool soundtrack and you have a documentary like very few others – one that keeps you hanging on to the edge of your seat! Severe Kart Racing is available through the online streaming service Amazon Prime Video and I’ve included the link below.

Kart Attack is a dynamic, high-intensity documentary that will ‘attack’ your senses as you race alongside professional kart racers in some of the most famous events in the U.S. It’s not a typical feature film, but rather a documentary that introduces your to the various aspects of go-kart racing.

The documentary is a collection of extreme karting footage from all across the country. You will find everything in here from the local club races to some professional ICC action. Kart Attack is a great way to experience the thrill of karting. It’s a 40-minute long visual experience in which you get to see racers battling it out for the top spot. As you can imagine, there is a lot of information and experience packed into these 40 minutes!

It’s not as long as some other documentaries and it doesn’t focus much on go-kart racing fundamentals or basics. Instead, it features certain elements that many others go-kart movies or documentaries don’t – epic high-speed action that will make you want to go out and tear it up at your local race track! Therefore, this documentary is geared towards the more experienced go-kart racers. Kart Attack is available on DVD and is something you should definitely keep on your shelf if you’re a karting fan.

As the last two entries were documentaries, let’s get back to a go-kart movie, shall we? Kart Racer is a movie directed by Stuart Gillard that shows you both the adrenaline rush of karting as well as the hardships that have to be overcome in order to win races. The story features a boy by the name of Watts Davies whose passion is to race go-karts.

When Watts is unable to buy a kart for himself to learn driving, he convinces his father, who was a kart racer himself, to help out. Together, they build a kart of their own and Watts learns to drive from his father. Watts then has to work hard and learn all there is to learn about go-karts so that he can take part in a competition and beat the current champion as well as a bully. Will he manage? Well, I don’t want to take too much away from this go-kart movie!

This movie is a great look into the work that goes into karting and the passion it takes to become a great kart racer. It also showcases how important one’s family is for the support that is needed to follow your passion for racing. Kart Racer is available from online streaming services, such as Prime Video. There’s a link below if you’re interested in checking in out!

Going all the way back to 1964, we have another movie all about go-karts, where a gang of young children decide to build their own go-kart from the junk they have lying around since they cannot afford to buy a new one. They need to build this kart in order to take on their rival gang and beat them.

As the movie proceeds, the rival gang of bullies tries to thwart our main team’s efforts to build a functioning kart but they manage to get it done and take it out on the tracks. This movie is definitely one of the more light-hearted ones on this list and it provides a very interesting look at how karting was done in the mid-1900s. It’s really great to see how go-kart racing has evolved throughout the years and how it was born.

For fans of karting, this is a great watch in order to take a look at the sport from a very different perspective. Since this is an older movie, you might have to search around for a DVD copy or try to find it on a video streaming site like YouTube. It’s only an hour long and definitely recommended to give you a different perspective. Enjoy!