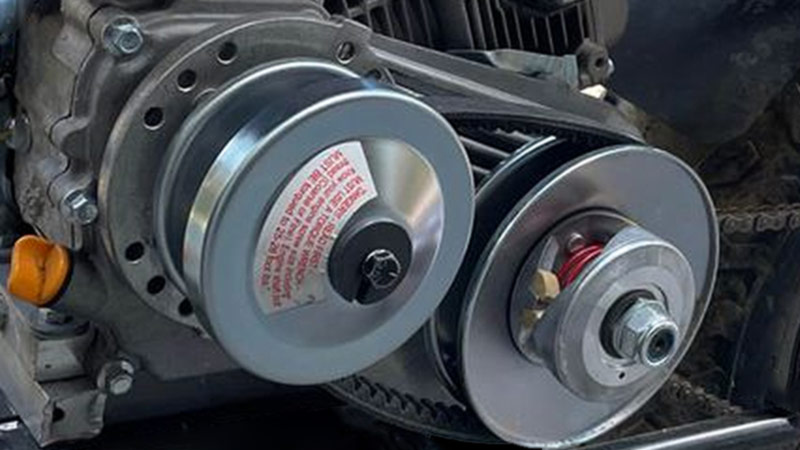 Torque converters are a common type of transmission found on go-karts, particularly off-road go-karts. As with many other components, torque converters have certain wear and tear parts.

Here are the 3 easy steps to put a belt on a go-kart:

The steps above are relatively easy to follow. However, before you start installing or replacing the belt on your torque converter, ensure that you have the right tools.

Here is a quick list of the things you’ll need:

Important Parts of the Torque Converter

Before starting the process of installing a torque converter belt, it’s important to familiarize yourself with all relevant components first.

In the illustration above, you can see that the (C) driver pulley is connected to the driven pulley (A) via a belt – also known as a drive belt (B). Each pulley is held in place with a nut and bolt.

Tip: You can easily identify the driven pulley, as it contains a spring (typically red).

The first thing you’ll need to do is remove the nut on the driver pulley. You can do this by using either a 1/2-inch wrench or a socket. Simply loosen the nut and twist it off.

You may use the illustration above to locate the components on the drive pulley. It’s important to note that you won’t need to remove the driven pulley at all. In fact, simply leave it in place.

2. Place the Belt Onto the Pulleys

If you are replacing an existing belt on your go-kart’s torque converter, then you’ll need to remove it first, before putting on a new one. Simply slide it off the driver pulley bushing.

You may need to exert a little bit of pressure on the bushing so it doesn’t come off when you remove the belt. Once you slide the belt off you’ll also be able to remove it from the driven pulley.

You’ll now need to place the new belt on the torque converter of your go-kart. If you don’t have an existing belt installed, your process will start here. Simply place the new belt around the driven pulley first, which is intact.

If you have an asymmetrical belt, ensure that the flat side is always facing the engine and the angled side is facing outward. For symmetrical belts, you won’t need to check this.

Now that your belt is in place, ensure that it has the right amount of tension and that it’s the right size. You may check the go-kart belt size chart for more information on compatible belts for your torque converter.

You are now tasked to reinstall the bolt, washer, driver pulley cover, driver pulley and sheave in the reverse order, as you have initially removed them. Simply slide on the sheave, followed by the driver pulley, the cover, as well as the bolt and nut.

Once you tighten the nut, you’ve completed the entire process. It’s much simpler than it actually sounds! Well done!

Some people have written in and asked some questions about installing a belt on a go-kart. I’ve compiled the most common questions and made the answers available below.

How Long Does It Take to Change a Go-Kart Belt

Installing a new belt on a torque converter takes about 5 – 10 minutes, depending on your skill level. If you are more experienced, you’ll be able to do this in just a couple of minutes.

For people who are doing this for the first time, you’ll still be able to do this fairly quickly but will probably spend more time identifying the part locations.

Where Do I Find the Right Belt?

You should always replace your existing belt or install a new belt that is compatible with your torque converter. One way to do this is to check the belt size chart for a compatible option, or refer to the owner’s manual.

You can also read my separate guide on measuring go-kart belts for more information.