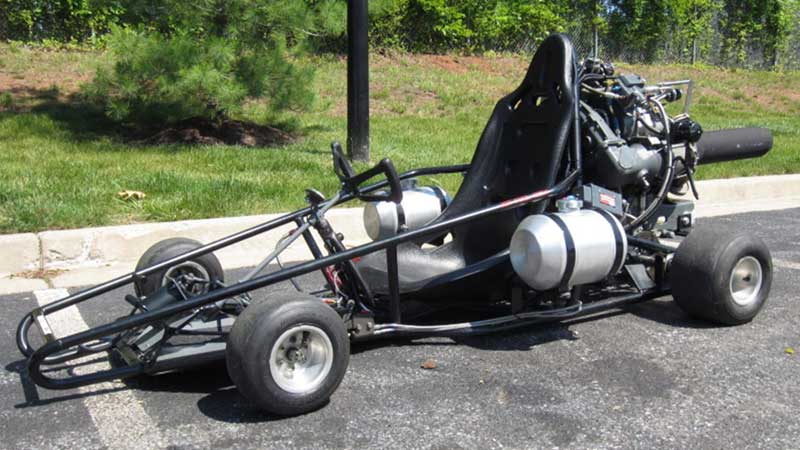 Look up in the sky at any moment and you’re sure to see a passenger jet screaming through the sky at over 600 mph. What powers these marvels of modern aviation? That’s right! A huge, kerosene-burning, jet engine with tens of thousands of pounds of available thrust.

Believe it or not, not all jet engines are huge beasts that power aircraft to remarkable heights. In recent years, several home based builders have fashioned jet-powered karts in their home garages. These karts have not only shattered norms but records as well!

Think you’re ready to scream down the track? Let’s talk about jet-engines!

What are Jet-Powered Go-Karts?

Traditionally, go-karts are powered by either electric motors or gas engines. In recent years, electrification has become commonplace through all sorts of racing and go-karts are absolutely no exception since electric motors are both good for the environment and provide instant torque.

On the other hand, gas engine karts are as old as the sport itself and range from mild to totally wild. So in this case, a jet-powered go-kart would eliminate the gas or electric motor on a go-kart and replace it with jet engine propulsion.

The jet-engine engine is typically mounted to the frame of the go-kart and can be found on the rear of these pint-sized racing machines. They include a large intake and even larger “chimney” or exhaust that hangs several feet off the back. You can also expect a large gas tank to fuel this monster.

How Do Jet-Powered Go-Karts Work?

While they do provide propulsion, that’s about where the similarities end between a jet-powered go-kart and a traditional go-kart engine. Jet-powered go-karts do not actually drive the wheels, rather, they provide thrust from an engine mounted to the frame of the kart,  while the wheels spin free.

There is no connection from the engine to the wheels of the kart. Again, think of a jetliner. All the wheels do is provide the ability for the go-kart to roll and all other propulsion comes from the jet engine. Essentially a jet engine takes air in rapidly, compresses the air within the main chamber of the engine, and ignites this compressed air with fuel.

Compressed air, mixed with fuel is then forced through a small opening, thus providing thrust. The general rule is: more fuel = more thrust. Some designs even include an afterburner, which basically sprays fuel directly into the hot exhaust of the jet engine for even more power.

Why Jet-Powered Go-Karts are Uncommon

Jet engines are simply not ideal for road vehicles. They are extremely inefficient when getting a vehicle up to speed and are designed for low-friction situations such as flying. For example, once an airplane reached cruising altitude its engine power is reduced to only about 10 or 15% of its maximum capacity. The slippery nature of an airplane and the low amount of air friction at higher altitudes allows the engines to produce less thrust to maintain speed.

Since go-karts typically go around tracks, there is a considerable amount of speed increases and speed decreases which will cause a jet engine to burn through way more fuel than a kart can practically hold for a typical race.

A jet-powered go-kart is also an incredibly difficult engineering challenge and only the most adept individuals will even attempt to put a jet on the back of a go-kart! One of the best things about go-karts is that you can pretty much mount anything to the frame and modify it to power the wheels. Whether it’s practical or not is another question entirely.

There’s also an extremely large amount of dollars that go into the build of a jet engine and most weekend racers are not going to have the time or funds available to embark on the endeavor of building a jet engine in their home garage.

The short answer to this question is no, a jet-powered go-kart is not safe.

It’s also a hazard to those around them since there is a searing hot exhaust to contend with as well! Who wants to be stuck behind the guy in the jet-powered kart getting blasted by hot gas? Not me!

It’s now time to feast your eyes on some of the most innovative and awe-inspiring jet-powered go-karts that have not only shown how much of an engineering marvel they really are, but some have even broken world records.

Tom Bagnall broke the speed record for the fastest go-kart in the world in 2017 with his magnificent jet-powered kart that was built in a shed! The mechanical engineer managed to clock in a whopping speed of 112.29 mph with his afterburner system and topped up fuel tanks.

Colin Furze has a popular YouTube channel where he features his innovative and crazy inventions. In 2015 he decided to build and document an awesome jet-powered go-kart for the world to see. Colin also created an entertaining highlight reel of his jet-powered kart tearing through an airstrip. This is definitely one of the craziest builds out there!

It takes patience, money and dedication to build a jet-powered go-kart, only to watch it blast through an open road. While it’s application appears to be rather senseless, the innovation and technical ability required is nothing short of extraordinary!