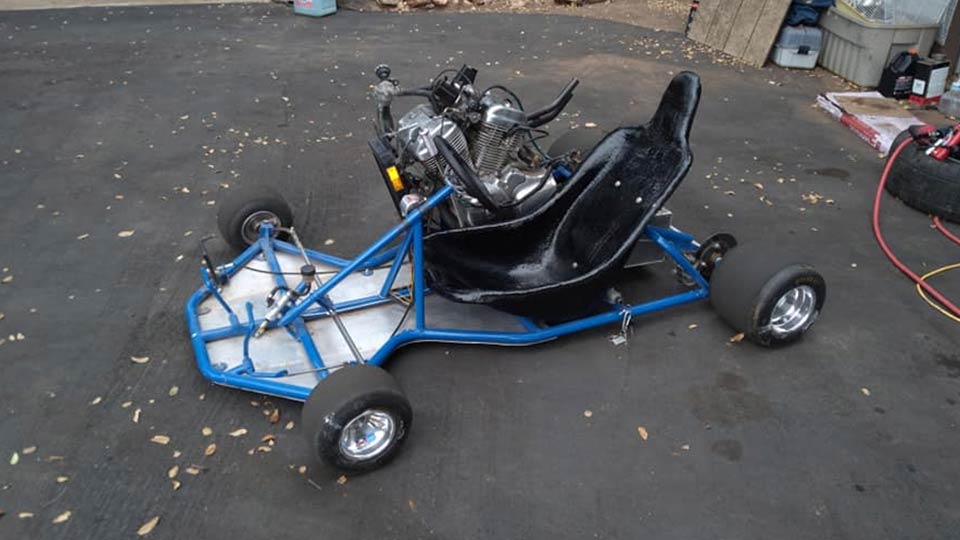 Have you ever wondered why you only come across two-stroke or four-stroke go-kart engines in single cylinder configuration? Even for homemade go-karts, the engine of choice is typically a two-stroke engine with a single cylinder. Why do we see V-twin engines so rarely on go-karts and what could be the reason for that?

In this article, we’ll explore some benefits of the V-twin engine and also understand why they aren’t typically seen on go-karts. We’ll also be taking a look at some homemade and custom made go-karts with V-twin engines.

What Are the Advantages of V-Twin Engines?

V-twin engines have been commonly used on motorcycles for a long time, for many good reasons. Occasionally, they’re also used for go-karts but it’s quite uncommon. Let’s look at some of the advantages that V-twin engines have over conventional single cylinder engines of go-karts.

Why Are V-Twin Engines on Go-Karts Uncommon?

As stated, V-twin engines on go-karts are quite an uncommon sight. There are several reasons for that. Single cylinder gas engines are usually the engine of choice for homemade, racing and off-road go-karts. Compared to the more powerful V-twin engine, a single cylinder engine is much lighter in weight. Go-karts are speed machines that thrive on being quick around corners and not for drag racing. A V-twin engine would just be too heavy for race track, especially one with many corners.

Secondly, V-twin engines redline much later. This means that single cylinder engines may reach a lower top-speed in comparison,  but they reach peak acceleration much faster. This is crucial for go-kart racing, as karting tracks have a lot of corners and chicanes. You’d want to reach top speed as fast as possible, before you have to step on the brakes again.

Go-karts are also known to be cost effective racing machines. V-twin engines are quite a bit more expensive compared to single cylinder engines. So, if you’re into racing go-karts on tracks V-twin engines aren’t recommended. For off-road or homemade go-karts V-twin engines on the other hand have an application and can be a lot of fun. For smaller karts, a V-twin engine can be quite of an overkill, but if you’re building a go-kart at home yourself, a V-twin could make for a really fun project!

Although V-twin engines are uncommon on go-karts, they are extremely fun to install on a homemade or off-road go-kart. They have smooth power delivery and are extremely fun to race with. Let’s take a look at some of the most popular and fun V-twin powered go-karts and how they have been set up.

I really like what they did over at Red Beard’s Garage. He upgraded his off-road go-kart by swapping the standard single cylinder engine with a powerful 670cc V-twin horizontal engine from Predator. This beast of an engine has 22 hp and durable cast iron cylinders. He’s also installed a custom air filter, dual exhaust and many more upgrades. Listen closely, as this V-twin four-stroke engine lets out a mean growl that is especially audible when he starts revving the engine.

Over at Oliver Motorized’s Channel, he’s done a fun project where he installs a 14 hp V-twin engine from Briggs and Stratton. It has a displacement of 460cc and of course, this engine is a complete overkill for this small kids go-kart. However, this is exactly what makes this project so much fun. He’s also upgraded a few other things such as a smaller sprocket. As you can see in the video, he’s had to do quite a bit of work by lining up the sprocket and creating enough room for the large V-twin motor.

3. CarsandCameras’ V-Twin on a Custom Go-Kart

CarsandCameras are known for creating fun experiments with vehicles and this project was no different. They’ve managed to install a Briggs and Stratton V-Twin engine on a small custom made go-kart. This engine is the same one that Red Beard’s Garage uses and has 22 hp with a displacement of 670cc. They’ve also upgraded to Honda Gx390 carburetors and funky racing mufflers. This engine is so overkill, that the kart literally does wheelies when accelerating. Great fun to watch!

As pointed out in this article and as can be seen in these videos, installing a powerful V-twin engine onto a go-kart can be an extremely fun project. V-twin engines offer so much power to any go-kart that you’ll easily be able to pull off wheelies. This is because they deliver so much power and the back of your kart is relatively heavy.

You won’t commonly see V-twin motors on racing go-karts as they are very costly, achieve top speed and max acceleration later and are much heavier compared to V-twin engines. That’s why go-karts tend to stick to the traditional horizontal single cylinder engines. However, if you want a fun project then there shouldn’t be anything stopping you from a beastly V-twin engine upgrade!